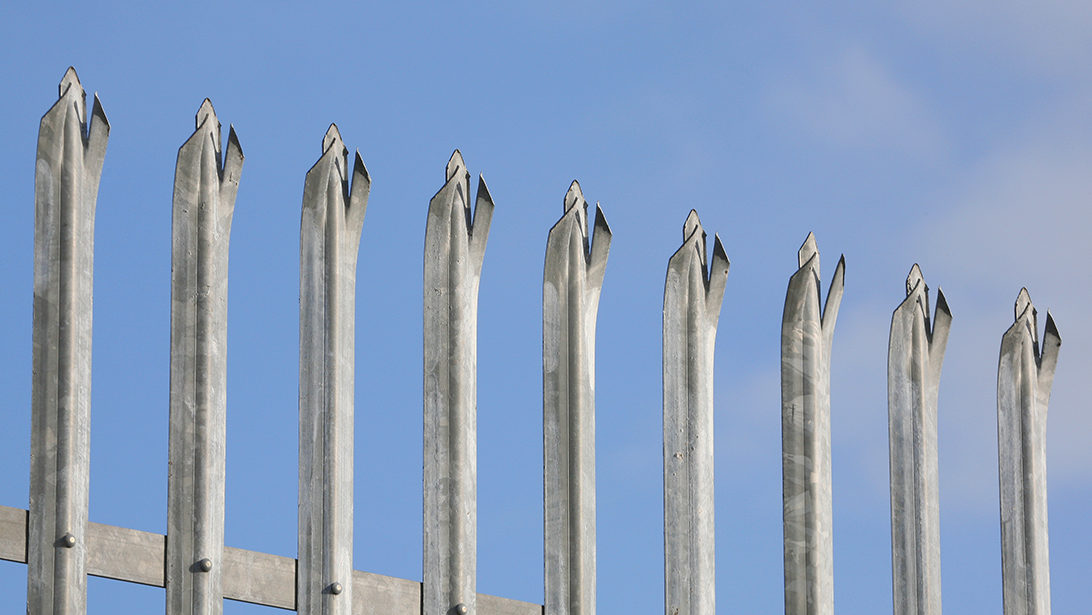 There was once a time when palisades formed the sturdy protective walls of Greek and Roman military camps. Their design and security prospered throughout the era of pre-columbian North America and much later all around the globe. Now today, in 2019, these widely popular security fences still exist in the current market. From classical era to a classic choice, the principle of palisades has endured and developed over time.

In the modern age, the place of wood as the best material for palisade fencing has been somewhat lost. Nowadays, other forms of palisade fencing take precedence and Ezi Klamp is here to provide them.

What is palisade fencing?

Palisade fencing is a popular and revered fencing solution that is utilised all around the world. It’s an application to a site, building or area that you probably pass daily but don’t truly stop to think about but its abilities and impact have kept it an installation choice for countless years.

Palisade fencing is highly versatile due to the fact that the environment it can be used in is almost endless. Palisade fencing can be found in both urban and suburban areas and is an impactive demarcating device for various facilities ranging from industrial estates to luxury builds, stadiums, train stations, airports, hospitals and schools.

Not only does it set the boundaries of a parameter of an establishment but it also offers high damage resistance and security features. If you’ve ever seen the tip of a palisade fence then you’ll probably understand why.

How to install palisade fencing?

Simply having palisade fencing at the border of your complex isn’t going to provide the security and quality that you need to truly get the most out of your fencing choice. The correct installation of palisades is imperative to ensure they last for longer and are maintained as imposing features. For the installation of palisade fencing, we never recommend less than two people to perform the job.

To begin with, after all risk assessments have been made, the area will need to be leveled and string lines set out to ensure the fencing is completed in a satisfactory linear formation. Based on the number of fence posts, mark out the spaces between them and follow by making an indication of the railings in between. If installing a gate, it is advisable to start with the gate post and expand out towards the first corner and/or end.

Using the appropriate equipment, and observing the correct health and safety procedures, dig the hole to the required depth in order to accommodate the fence posts provided. Check the levels of the then dug hole in order to ensure the guard post stands vertically. If so, fill the hole with the required concrete mix – ensure the post is kept upright whilst drying.

Only when the first post is secured upright should you proceed to dig the next post hole. Do not try and install all the posts at the same time. Instead, work one post and panel at a time, as any errors in measuring the post distances will be harder to correct once the posts are concreted.

From there, assemble the interior sections of the fencing panels and ensure that all fixing are tightened when appropriate to do so.

As previously stated, the key perk of palisade fencing is its versatility. Palisade fencing offers solutions for most sectors from infrastructure to health to education. Its sturdy nature and fairly simple installation process (for the right people) make it diverse enough for those of varying ability.

Railway stations and airports, as well as police stations and schools, truly benefit from the security potential provided as it makes it extremely difficult for individuals to enter the premises without being noticed or causing themselves serious harm.

In terms of the potential of its design ability, palisade fencing has a place in architecture. The initial perspective is that the coating and material can be imposing and unpleasant to look at but ultimately palisade fencing blends into the scenery around it. It’s an inconspicuous solution that can cover a large area and still provide pivotal security possibilities.

Based on its possible prospective uses across the industries, it’s an efficient solution for anyone with a project that requires secure fencing. From building merchants and fencing contractors to those in the power and utilities industry, investing in palisade fencing can either be about keeping things inside safe or keeping unsavoury people out. Or just providing a strong exterior partition between businesses. 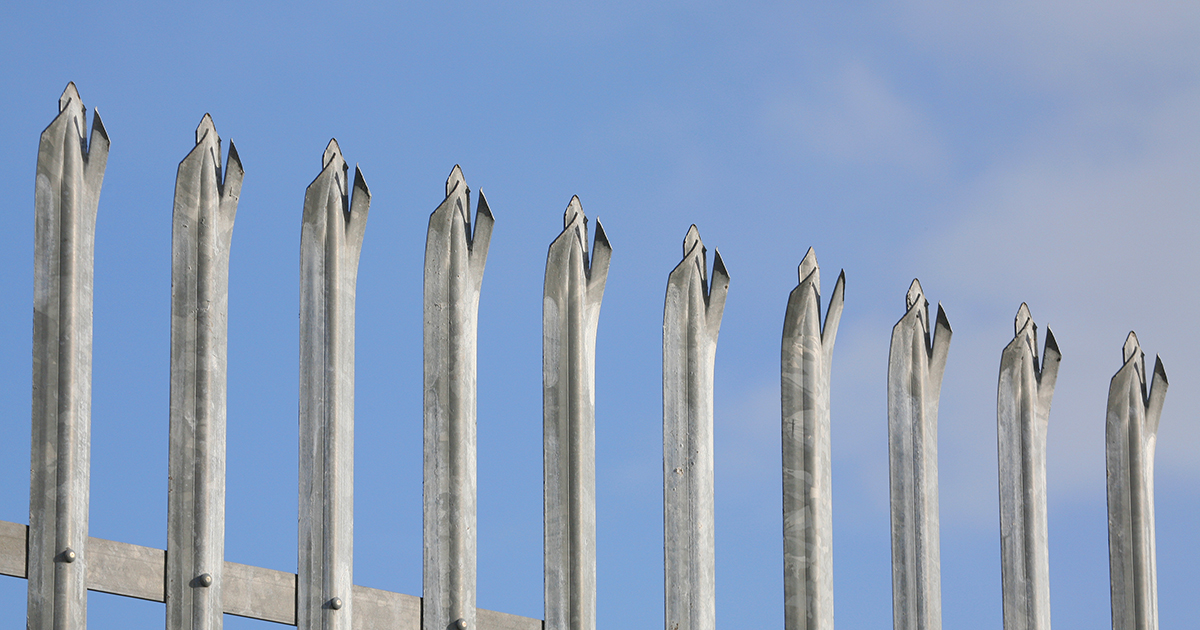 Steels strength completely depends on the alloy it is combined with but a general conception and verifiable understanding is that steel is strong. The material is used for things that we used every day such as vehicles, surgical tools and elevators. Items we trust.

However, when it comes to steel palisade fencing, the market has become saturated with distributors who hail its uses without the material quality to back it up. Steel isn’t cheap and those who purchase it aren’t usually price conscious but it isn’t cheap for suppliers either.

To get around this, some suppliers will distribute low quality steel which will inevitably lead to damage and rust. Palisade fencing is built to be durable and a project a good ROI but with the wrong material used to build the project, money will be lost sooner rather than later.

Here at Ezi Klamp we understand the benefits of GRP – that’s why we use it! We also understand the debate within the industry that exists surrounded GRP fencing vs steel which is why we’ve gone to great lengths to cover why we believe GRP is a beneficial alternative before.

Palisade fencing is already used for plenty of installments but with GRP fencing, this becomes even more efficient. GRP can be made to specific sizes and lengths in order to be appropriate for smaller and larger environments.

At Ezi Klamp we offer bespoke fencing and additional sizes on request to ensure that your next GRP fencing project is specifically how it’s supposed to be.

Where is GRP palisade fencing used?

Due to its lightweight nature, it applies to these places no matter the size and the installation can be done without huge amounts of labour. It’s relatively maintenance free so regular visits are not required to particular sites that are further away from main buildings.

Made from corrosive, chemical resistant materials with a non-conductive natures mean that even if a technical fault occurs, the fencing will not be damaged or become a further part of the issue.

Mostly, however, GRP fencing is a great addition to all of the above mentioned simply because of how strong and secure it is. You can trust its design to act as a deterrent in any place of installation, meaning that constant surveillance is not required.

What are typical GRP fencing prices?

GRP fencing is a developing market. With its positives still being learned across the industry, it is on the way to making a big impact in the United Kingdom.

Although the prices of GRP fencing are entirely dependent on the stockist and may sometimes seem more expensive than low quality steel palisade fencing alternatives, GRP fencing is an investment.

With a lightweight, easy installation GRP fencing is the stronger contender from the very beginning to save time, money and effort on labour in the initial phases. In terms of return on investment, GRP not only keeps what is contains secure but it defends itself as well against harmful impactors.

Its fire retardancy protects it against high levels of heat and its coating ensures that it survives in areas with high levels of salt in the air – a direct contrast to some alloyed steel that deteriorates rapidly in these conditions.

To find out a quote for your next GRP project, don’t hesitate to contact us today. 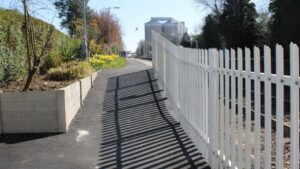 Where to buy GRP palisade fencing in the UK?

With more than 20 years in the industry, Ezi Klamp perceives itself as a forerunner in the building supply industry. With specialistic materials and projects designed for handrail, fencing and barrier solutions, we know we’re as safe and secure of a choice as GRP fencing is.

We know that customers often need materials quickly; which is why we hold large stocks to ensure we can fulfill your needs as efficiently as possible. Our GRP palisade is made to order, meaning we can meet the needs and requirements of any project.

So when it comes to completing a palisade fencing project, don’t hesitate to let us help you make it great. Browse our range of handrail and barrier solutions product range or contact us today on 0117 970 2420 or email sales@eziklampsystems.com

Back to News articles

get your free ‘EZI-QUOTE’  PROJECT ESTIMATE WITHIN 1 HOUR